LEOMINSTER---Michael O. Austin, 55 years old, of Leominster, died Saturday, May 27, 2017 in UMass Memorial Medical Center, University Campus, Worcester. He is survived by his daughter Elaina Lee Austin of Grafton, sister Judy B. Holman and her husband Allen of Tulsa, OK, brother John E. Austin, Jr. and his wife Rosemarie of Leominster, nieces and nephews. He was predeceased by his brothers Bruce Stokes and Richmond Lewis Austin and his sister Ural O. “Sissy” Austin.

Michael was born April 30, 1962 in Shirley, son of John E. and Eddie Lee (Stokes) Austin, Sr. and was life long resident of Leominster. He graduated from Leominster High School in 1981 and was presently a Freshman Football Coach at Leominster High. Michael had been the manager of Wyman’s Liquors in Fitchburg for several years and was a local DJ. He was a member of the New Hope Baptist Church in Ayer and was a founding member of the Blue Devils Football Club. He coached football in Leominster at various levels for the past 35 years, coached Little League Baseball in Leominster for several years and umpired baseball in the area for 23 years.

A funeral service will be held on Friday, June 2nd at 9 am in the New Hope Baptist Church, 139 Sandy Pond Road, Ayer. Burial will be private. Calling hours will be held on Thursday, June 1st from 5 to 8 pm in the Silas F. Richardson & Son Funeral Home, 106 West Street, Leominster. In lieu of flowers donations in memory of Coach Mike Austin may be made to a Leominster youth sports program of the donor’s choice. There will be a “Celebration of Life For Coach Mike Austin” on Saturday, June 24th from 2-7 pm at the Knights of Columbus, 484 Lancaster Street, Leominster. 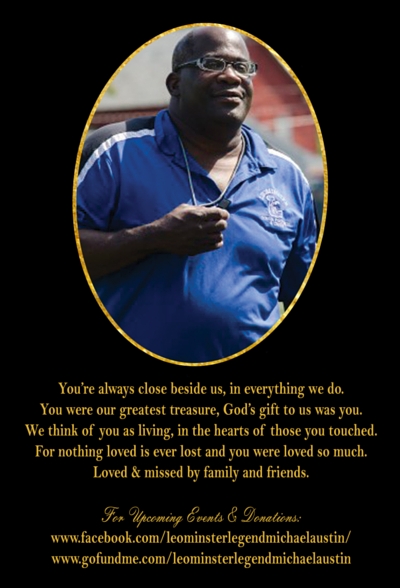 LEOMINSTER -- Mike Austin was known as a leader, mentor and coach who "had a heart of gold."

The Leominster sports community is left saddened and heartbroken after hearing the news that Austin died unexpectedly Friday night.

"He did so much for kids as a coach in youth sports," said good friend Bobby Valera of Leominster. "He coached football, baseball and basketball. He loved sports, but for him it was always about kids playing. He ran camps and always included kids who couldn't afford it. Michael had a heart of gold and he would do anything for anyone. You just don't make them any better than Mike Austin. We lost a legend in our community."

Austin dedicated his life to helping today's youth, while being a positive role model and an honest man who believed in doing things the right way.

"He was a Leominster guy through and through," said friend and fellow umpire Jeff Dedeian, who is the Leominster American Legion baseball coach. "He gave so much time and energy to the kids of Leominster. He had a goal of helping kids get better in life.

He was a great guy who cared more about other people than himself."Palazzi called Austin "one of the most incredible human beings ever."

"There is only one Michael, and people of the community that knew him would say the same thing, no doubt," Palazzi said. "There are many people who have contributed to Leominster and Leominster's youth over the years, but he supersedes all of them without a doubt with the amount of time and effort he put into trying to change kids' lives for the better.

"The way the world operates today, I'm not even sure it's possible to be as involved as he was over the course of his lifetime. Leominster definitely lost one of its greatest. I hired him as my freshman coach to come back and teach the kids a lot of the old-school values, and he really taught those kids about respect, teamwork and doing the right thing. He would yell at the kids when I came around and would say, 'Look at coach in the eye when he's talking, shake his hand and wish him good luck.' Unbelievable."

Former Leominster High football and basketball star Blake X. Curry said he never thought of himself as a football player because he was always about basketball.

But when he met and was coached by Austin for two years as a youth player, Curry says Austin opened the door to his football future.

"He taught me respect, loyalty, teamwork, family and work ethic," Curry posted on Facebook. "He never accepted the least, pushed me beyond my limit and, because of his great ability to teach with passion his players trusted him, his parents loved him and the other team feared him. He was, without a doubt, the first person that ever made me work hard on my skills, but more importantly, he pushed me to work on myself.

"Over the years I'd see him all over town and at events and he would always get a big smile on his face when we'd run into one another. I would have never gotten into the school I did if it weren't for football, and I would have never taken football seriously without coach Mike Austin."

Added Leominster grad and current Fitchburg State University baseball coach Kevin Barnaby: "(Austin) volunteered his time to all of us who played for him, and I can say with certainty that I would not be the man I am today if I didn't play for him. He inspired me to want to give the same impact and guidance to the kids I coached."

There was an outpouring of love and respect for Austin on social media throughout the day.

In a Twitter post, Patrick J. Aubuchon tweeted about Austin: "Selfless and committed to Leominster's youth. A loyal and true friend to so many, young and old. RIP Michael. You left an incredible legacy."

Good friend Sid Rafuse -- the former Leominster Legion baseball coach -- said no one in this community affected more lives over the last 30 years than Austin.

"He was a great friend to so many of us," Rafuse said. "He cannot be replaced."

Rafuse also referred to Austin as a man of great faith in God.

"He loved his church and loved to share that part of his life with all of us," Rafuse said. "His football teams would attend church as a team. Players, cheerleaders and parents. Everyone was involved. He got that love for the Lord from his mom. She was an incredible woman whom he missed dearly. Now, he can be with his two greatest loves, Jesus and his mom."​